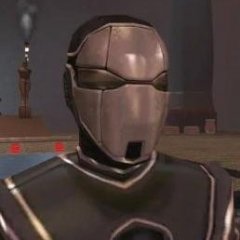 A simple mod that goes in and tweaks the character flags for Juhani's dialogue file, her section of the Dantooine Grove dialogue file, and her scipt that allows a male PC to romance her.

She'll still refer to the PC as female since splicing audio is far beyond my capabilities, but I took the time to do this, and as far as I'm aware, the only other file that ever attempted to do this is broken.

Installation is simple and just requires moving the files to the Override folder. The only mods that might conflict would be those that edit Juhani's dialogue, her scripts, or one particular file for Dantooine (though I'm not aware of any mods that also alter this file.) Maybe one day I'll be good enough to make use of the TSLPatcher.

Many thanks to @ebmar and @DarthParametric for answering a couple questions I had that without which this mod would have not been possible.