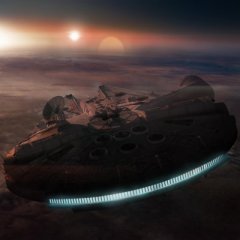 Working in another MOD i realized the little attention paid at small and most of times unnoticed things that I think could have a bit more life in the KotOR universe. So simple as improve lights and buttons of panels and such and animate them.

The pack is not complete yet and do not cover all the things you can find along KotOR. That means that in the future I could make bigger the pack adding new elements or new improvements.

NOTE ABOUT THIS MOD

If we think in any current estandar graphics anyone can think that the new aspect could be extracted from "Doom" (the First, not the Second

) but keeping in mind that the work is made with the Paint app of the WinXP and if we compare it with the originals ones... well, it's not so bad.

The elements included are:

- Computer Panel (on floor)(Improved over 0.9.0 version) with four versions, BLUE, ORANGE/BROWN, GREEN and RED (sadly only can be used one at the time)

- (NEW) Animated Panel when a Computer is used, making it similar to the on floor Computer Panel Placeable.

The Wall Computer Panel shares its texture with the Power Conduits and with the Info Panels. That's why I haven't modified it too much for not find weird lights or weird buttons in weird places of the three Placeables, but now you have three animated elements for the price of one.

Unzip the downloaded file. Each element has its own folder. Just copy/paste (or drag and drop) the files from the desired folder(s)/element(s) to your  'KotOR\Override' folder.

The files of the "After and Before" folders are not needed, they're only for to show the results.

Simply remove the files from your Override folder.

If you are able to find one I invite the next round. It's just a change in the textures. I've run and re run all the Endar Spire and the Taris Appartment lots of times with these files and found nothing, even the ones that are involved in the Plot as the Footlocker at the start of Kotor, the Computer Panel that permit kill Siths in the next room or the Workbench in the Taris Appartment.

The only one thing I think that could occur is that you find any of these textures in other Placeables/Locations that I haven't noticed by the time and share the same texture files (I've seen that in other MODs).

If the result is "fine", nothing, go ahead (although I'd appreciate a warning via post or PM). If the result is weird or bad is obliged the warning so I can correct it asap.

This is not really a bug but KotOR has its own way for to show images and textures. I've noticed that most of times just cut, invert, compress, wide, tight the same images (files), I guess for get more variety without too much work, this can result in some weird -or not too much fine- vision of some elements. It's very dificult -if not impossible- find a balance for get a fine vision of all the images in all the places that are located/used and is very noticeable when is used any text. I hope not everybody knows read aurebesh...

It's expressly forbidden upload this MOD or any part at anywhere. If I want to see it over there I can upload it myself.

If anyone could be interested in include it or part of it in his/her own work, PM me here at Deadly Stream and talk about.

This MOD is provided as-is and is not supported by Bioware, Obsidian, Lucas Arts or Disney. Use this file at your own risk. Neither the author nor the companies mentioned above are responsible for any damage caused to your computer for the usage of this file.

Made with love and funny to do it. Enjoy it!!

About the updated version 0.9.1

The elements of the old uploaded version 0.9.0 has some minor improvements or added animations so I've decided repack and upload all the elements -old and news- in one single file and I've restructured the pack.

Those users that already were using the 0.9.0 version just overwrite the files when prompted for install the news, anyway I've kept the old versions just in case. Keep in mind that with the Locker and Footlocker -now animated with the 0.9.1 version- if you want to come back to a non animated version, besides overwrite the .TGA file you must remove the corresponding .TXI file.

- Incremented a bit the difference between the dark/bright states of the yellow lights.
- Removed some of the greenie tone of the lights in the upper right corner.

- Added an animated Panel when a Computer is used making it similar to the on floor Computer Panel Placeable. The version I've worked with is the blue with resolution 1280x960 file. There is a brown version as well (that I don't remember where is found in game) but I'll decide what to do with it when I found it depending the context).

- Incremented a bit the difference between the dark/bright states of the yellow lights.
- Removed some of the greenie tone of the lights in the upper right corner.
- Added a NEW Orange/Brown version

- Added the animated Blue Workbench. (NEW)
- Added both, Orange and blue, animations to a small panel device placed on the table.

- Added animations to the lights and the screen.

- Now all the panels and screens of the Endar Spire are animated.

NOTE: In the Screens folder You'll find two .TGA files, "LHR_panl02.tga" and "LHR_panl03.tga". This last can be weird because it's a white square but is needed use it for avoid the original bouncing sign on the screens.

- Animated Lights in all doors.

- Now the panel is animated.

- Now the screens and panels of the Taris walls are animated.

- Animated lights in the Shop Sign. (For a best sight -and a small surprise- use the first person sight...)

- Animated panels of the Kolto Tanks.

- Improved and Animated Screens seen around Taris (Apartments, Bek Base...)

- Animated Panels around the Vulkar Base.

- Animated light.
NOTE: For the cutscenes seen by the time is the same red light seen in the Bridge of the Leviathan, so you can expect the same animation in both places.

- Animated lights (found in the Hiden Bek Base).

- Animated lights in all doors.

- Improved and animated small Screens inside the Sandrale State.

- Animated lights in the circular doors.