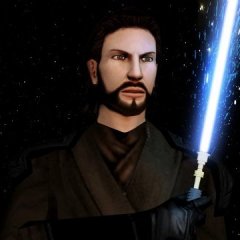 About this mod: Based on a thread started by Sith Holocron over on DeadlyStream (and a suggestion from DarthParametric), I decided to record the in-game version of KreMov01, Kreia's Fall and sync it with the original version's audio. This in-game version existed (I believe) in TSLRCM a while ago, but was eventually left out due to the SFX not matching those of the original BIK movie; Kreia's scream, the SFX of Sion smashing her into the wall, etc. So, I decided to edit the footage and sync it with the original audio to create a more complete experience. This involved trimming the in-game version at some points to match the original beat for beat, but I tried to get it as close as possible.
The edited video was recorded and exported in 1080p resolution and looks great when played as a .wmv file, however, I should note that the conversion to a .bik format has lowered the quality somewhat, however, it is still leaps over the original 2004 version.

Installation: Simply extract the "KreMov01" from either the vanilla or reskin folder to your Movies folder, located within your SWKotOR 2 directory, when prompted to override the original file, click yes.

Uninstallation: Remove the "KreMov01" BIK file. Be sure to put the original BIK back in, otherwise who knows what will happen.


***I recommend making a back-up of the original "KreMov01" in case this you want to uninstall this mod.***


Bugs: None that I know of, this shouldn't interfere with any other mods.


*Please DO NOT re-upload this mod without my permission.*

- DarthParametric for providing the evil Kreia model with both hands.
- DeadMan for the TFU-style reskin of Sion.

Feel free to contact me if you have any questions/suggestions!