This mod changes the models for the Darth Revan/Star Forge robes to a modified version with the cape and belts seen on the cutscene version of Revan’s robes, but without the raised hood and mask. 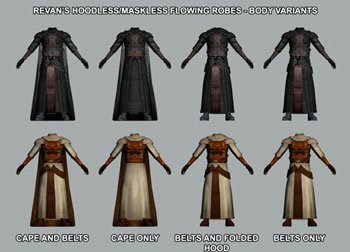 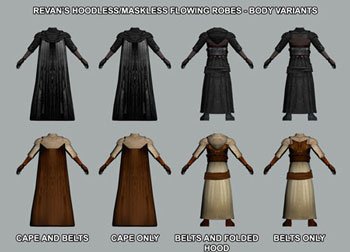 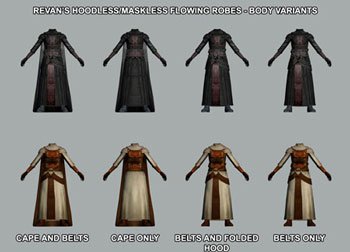 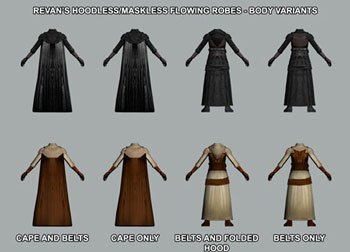 This mod relies on Hunters Run’s Revans Flowing Robe TSL mod for the animations. You can download that mod from here:

How to Obtain:
When Atris captured the Ebon Hawk, amongst the unencrypted data she downloaded from T3's memory core she discovered some interesting information regarding Darth Revan and his robes. She stored this data for later analysis, turning to the more pressing matter of the Exile's arrival on her doorstep.

While at the hidden academy on Telos, in the room before you get to T3 you can access the robe data via a console and manufacture a set of robes with the fabrication unit in the same room: 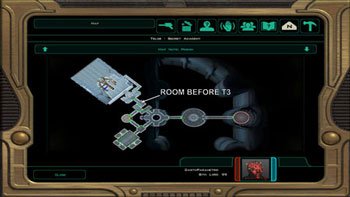 Notes:
The male version is a straight replacement for the PMBJ model, so it will not be compatible with any other mod that replaces/modifies that model, or changes the values for that column in appearance.2da. Because of the way animations work, the female version must be set up as a disguise, so it uses its own independent models and appearance.2da rows and is unaffected by changes to the PFBJ model or appearance.2da values. Note, however, that this means it is not compatible with custom female head models.

Currently there are no limitations on the generator. You can fabricate either set of robes regardless of alignment, and you can make as many copies as you like (with the caveat of course that once you leave the academy, you permanently lose access to the fabricator). I may change this in future.

If you are using TSLRCM, or another mod that has added 262tel.mod to your Modules folder, you will get a warning from TSLPatcher that this file already exists and was skipped. This is intended behaviour and not an error.

Acknowledgements:
Thanks to Hunters Run for the n_darthrevan flowing robes animations, without which this mod would not be possible.
Many thanks to Fair Strides and bead-v for looking over my scripts, fixing/checking for errors and streamlining syntax.
Thanks to DarthTyren for his tutorial on camera placement (although I had to source the quaternion conversion elsewhere)