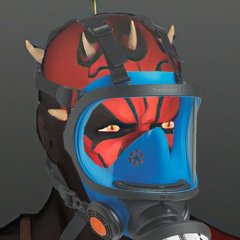 This is a companion to my  K1 Main Menu Widescreen Fix mod. In a similar manner, it adjusts the model file for K1's main menu so that it properly fills the full screen width of widescreen aspect ratios (i.e. 16:9, 16:10). It is designed to be used in conjunction with ndix UR’s KotOR High Resolution Menus mod (as pictured). But of course the major feature is that it swaps out Darth Malak for Darth Revan. There are four versions included:

Obviously this mod will not be compatible with any other mod that also alters/replaces the menu model (including my own - although the replacement KOTOR logos are compatible). As mentioned, it is intended to be used with ndix UR’s UI mod, and serves no real purpose without that mod.