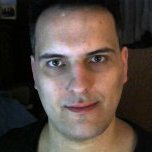 By NecroAvalon, March 30 in Mod Requests