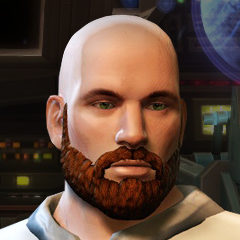 His files are in the KotOR 2 files (like many files from the first game) so it was a matter of enabling him to be picked as your player character and adding the missing portraits and dark side transitions.

He wears the Republic Soldier uniform as underwear and default clothing. I made his eyes slightly more blue.
There's no zombie look because I'm not a fan of that myself and there wasn't really a texture to easily reuse. Full dark side does get the yellow movie style Sith eyes and his hair becomes fully gray, half way to dark you get a mix of the two extremes.

This mod shouldn't conflict with any other mod.

Requested by Gooey on Steam.

You can use this with a K1 Trask HD mod, you just need to rename some files (and probably settle for no dark side transitions if you don't get creative yourself).

2. If you haven't installed any head mods after this mod you can get the following files from the mod's backup folder and put them back in your override folder:
appearance.2da
heads.2da
portraits.2da

Doing this when you did add another head mod would result in the later head(s) no longer being available in the game.