Having fun with the KotOR maps.

So it seems what started out as me meant to be playing both KotOR games again, I then started getting updated textures and tools to mod the game to my liking, I also ported a few maps for fun as well as a previous project I was working on where I intended on using the original KotOR maps from both games, eventually I ended up pursuing a complete port of the modules for both games having removed any mods from the game simply for preview purposes of the original contents for the mod.
Would you believe I have only been working on this since around Christmas Day?﻿

I will pursue preparation of what I am calling V0.25 a complete working version of K1 to K2 maps which may also include the K2 to K1 maps if I fix the issues or decide to include just the working maps.﻿

It will be safely and securely backed up until I know what to do with it while I continue to work on my mod for the second game, I won't start work on a mod for the first game until I am done with the main mod I will only write down the odd idea here and there once I have re-played both games because I do not remember them as well as I would like to be writing stories / missions / quests / side-quests / extra content for these games.

Turns out K2 was not released for Android or the App Store but K1 was.
I had thoughts about porting the entire game to the first as a mod in order to allow people to play the second game on their mobiles but this could actually lead to a cease and desist order from Obsidian as it could prevent an official release of a "K2 for the Mobile".
This was just an idea though and not part of the mod I am actually working on ( porting both maps to both games ) but primarily an expansion mod for the second game, if I cannot fix the problematic maps for the first game from the second game then I will not pursue any alternate projects immediately.
I am surprised I have not dropped this project but I am quite passionate about the Old Republic Era / Series of games, so I will continue with my current main project of a "modders resource" for K2 of the K1 maps as well as my mod to re-introduce all of the "live_planet"'s which are left in the games code which in my opinion would have been the 4 planets from the first game that were not in the second.
It only makes sense where they left all the doors and dialog entries for the doors, placeable objects, placeables, characters and so on as well as the ease of access to adding new content through the override folder or its equivalent on xbox classic, the only edit is that Yavin Door 01 becomes #76 and Peragus Door 01 becomes #64 in the genericdoors.2da file.
Though of course it would not make sense to remove much of this content as it would have been heavily re-usable the specific re-arrangement of the Yavin Door and Peragus Door tells me they at the least planned to introduce "lyv_m99aa" or "yav_m50aa" into K2 one day.
Who knows, perhaps one day we will know for sure, I have also found some more modules within the second game that I am not familiar with and do not have corresponding modules within the game, I will need to again construct new .are, .git and .ifo files for these maps.
Thor110

Entries in this blog

Just properly added in Yuthura during the final ceremony / cutscene of the game for the port. Made sure she is facing the correct directions during each part of the cutscene, though her placement could do with moving a little but it works for now. #1 of the seven/eight appearances she makes during this cutscene, in this one I feel like she could do with being moved to the right a little which I will probably do at some point in the future. Hopefully the position will work for the 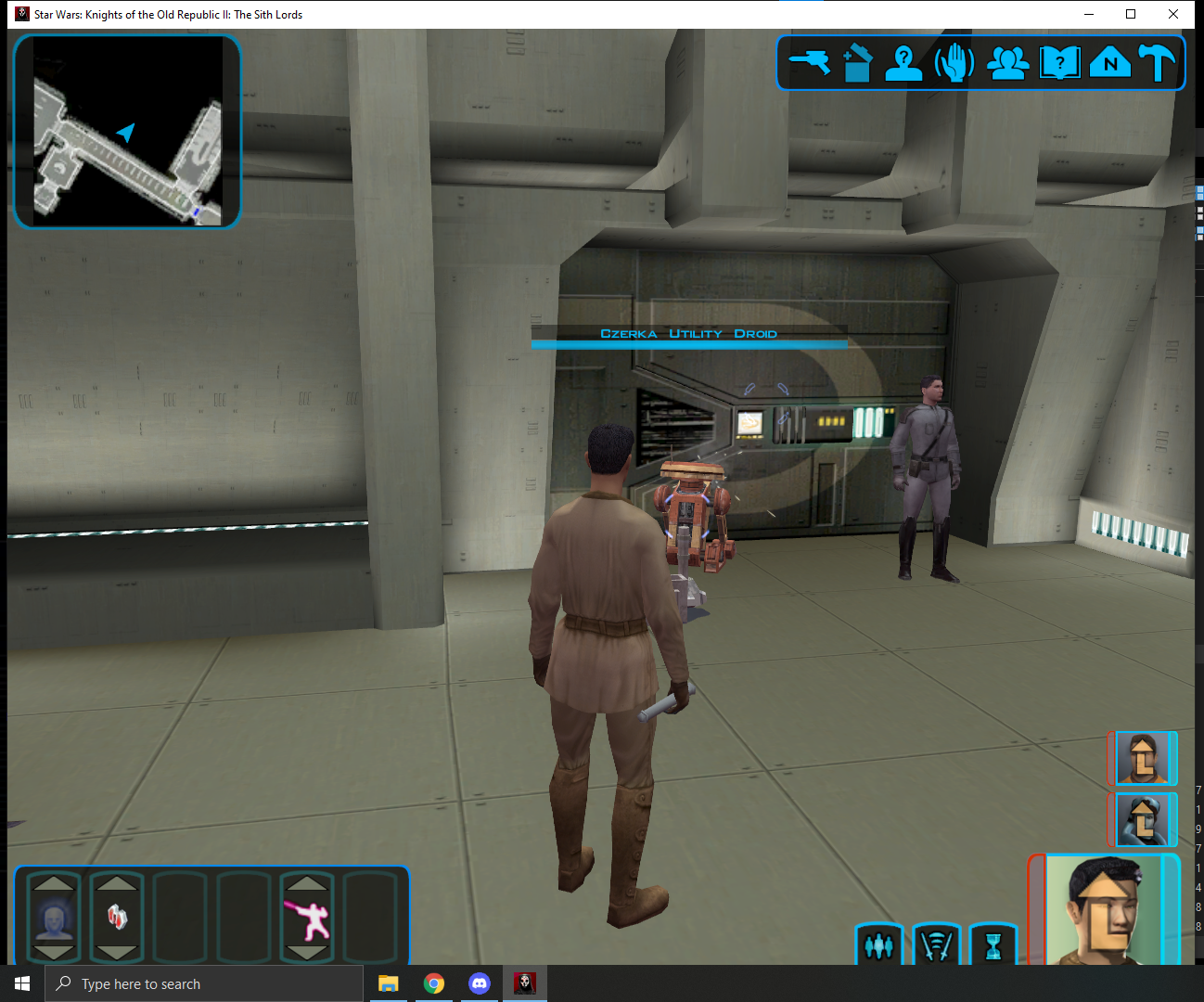 The porting madness continues! As many of you may have seen as I have made sure to post it around a bit in hopes of finding some more testers and maybe even people to help develop the project, I have not long completed my first playthrough of Brotherhood Of Shadow : Solomons Revenge and of course that lead me to porting it over along with the port of KotOR. Everything seems to work perfectly, which is great and should save me a lot of time. It can also easily be turned

0.8.3 Experimental Files for the Expanded Galaxy Project now feature demo levels of the Endar Spire. The video is outdated and the levels are now 99% functional / can be played through, I suggest starting a new game, skipping the prologue and then warping to "end_m01aa" In the future I might work on more levels, I found deconstructing and rebuilding these levels to be a really fun experience. I also think that they play and feel a lot better.

I AM REACHING OUT TO THE COMMUNITY Concerns & Worries I have been notified no matter what happens, once I release the first version of my mod, it will be the same as releasing the modders resource which means I will just be releasing them as one and the same. V 0_2_5 is ready and I will upload them when ready. Though for the moment in both games the areas can only be warped to. I am not sure when I will be releasing it as I have thoughts about the future of both KotORs that ma

"As there's a hard limit for new placeables in KotOR1 with very few spaces left, has that affected your porting of TSL modules to KotOR1?" - @Sith Holocron Great question! Got me thinking ^^ My thought was to just bypass the problem by completely porting the first game to the second game as a total conversion. Would also make sense as it would require users to port some files from the first game themselves ( exe, dlls, inis, music, sounds and movies ) and allow me to make an ultimate