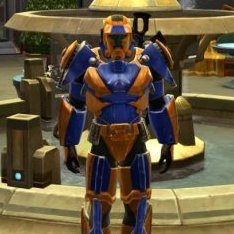 CREDITS: Me because I'm superior. BioWare for making TOR, the makers of Commando for making such an awesome game, and George Lucas for making the most epic six episode movie and changing the way we look at movies and giving every generation from '77 on

something to enjoy. Also John Williams for making such epic music to tell such an epic story.

DESCRIPTION: I put other music over the music that plays during the credits for the light and dark endings.

INSTALLATION INSTRUCTIONS: Put the original Malmov12.bik Malmov14.bik into a new folder in your SWKotOR2/movies folder called "backup" and put these in the movies folder.

COMMENTS: There is a click at the beginning of the movies. They weren't there until I mixed in the sound with RAD Video Tools. Nothing I can do about it sorry.

It took me 4 hours to do this. It's got the standard Star Wars credits music and then a mix of Balmorra music from TOR (soudns like it repeats but it doesn't) and KotOR2 music in the Light Side ending,

and Imperial music from TOR from various locations along with the first titlecard music from Commando and the music from Episode III called Padme's Ruminations. This is to give a more light side feeling to

the ending when you finish the Lightside ending and dark for the Dark Side ending rather than having the same music for both. The original credis video however is unchanged.

WITHOUT MY PERMISSION, PROVIDED THAT CREDIT IS GIVEN WHEN DUE.

THIS MODIFICATION IS PROVIDED AS-IS AND IS NOT SUPPORTED BY

BIOWARE, OR LUCASARTS OR

ANY LICENSERS/SPONSORS OF THE PREVIOUSLY MENTIONED COMPANIES.

FOR THE USAGE OF THIS FILE.

Next File Official 1.0b Patch